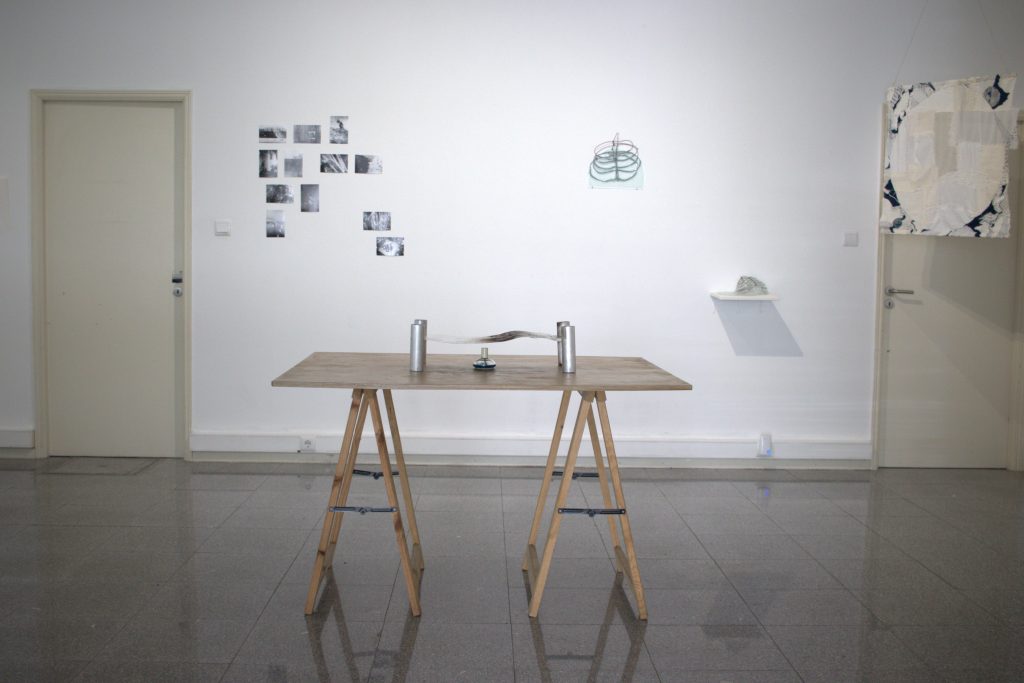 The text is based on the talk and discussion held by Ema Lavrador for the finissage of the “UNFINISHED” exhibition (02-12. June, 2022) at OKNA.

Between the 2nd and the 12th of June, a collection of works under the provocation “unfinished” got to be exhibited at OKNA. The presentation of these works is truly inspirational, because not only the public can have a look at the material “behind the scenes” of an artist’s mind, but also experience a blackboard of chaos and order of ideas coming together. Every work on this exhibition is a process, sometimes an interrupted one, sometimes a never finishing, sometimes a great idea or a beginning.

The process in which an artist is driven to create is divided by Beardsley (1965) into two sides: the conscious side, which is the reflection on aesthetics and motives, and the unconscious side, which is the creative action of experimentation. In this exhibition we have both sides in each piece, because, despite some of the works didn’t fulfill their purpose of publishing or getting into art residencies, they had a purpose of showing love, recalling memories, and evoking feelings. All of these works had a motive, but not finitude. Thinking on the unconscious side, to get to Okna, these works have not been altered by the opinion of a jury or curator, they are what the artist wanted them to be, without restrictions or prejudices. Some of these works are closer to the original seed of the idea than others, and we have to admire each work for the rawness of its process and not what its future was supposed to be.

In the Director’s Foreword of the book “Unfinished: Thoughts Left Visible” (2016), Campbell reflects on the notion of “finished artworks” with the question “How do I know when my work is finished?”. Here, Campbell highlights the fact that the “unfinishedness” of artwork began in the Renaissance when unfinished art was treasured rather than thrown away. The concept of non finito was present in the works of the renaissance artists Titian, Rembrandt, and Cézanne, as a truth value given to works that tried to reach perfection and divinity. In Modernism, with values very similar to the current ones, the incompleteness of the works became a way of representing infinity and appealing to the participation and imagination of the spectator.

Following the liberal ideas of modern and postmodern art, which does not care about its usefulness or lack of it, we can distance the perspective between the visual arts that are present in the exhibition and architecture. Here we see the process as a product, while in architecture we see the process as a hesitation towards the end when it is under construction, or ruin when it is abandoned. In the works of art that we will characterize next, there are several stories of their purposes and irresolution, but no work in this panorama seems to be a ruin, because the public can become abstracted from its function and appreciate it as it is.

When you go into the exhibition, the thing you can experience immediately is the need for sense. These works of art demand touch, sight, smell, and hearing after you get immersed in the concept of the room. This immersion gives you a strong feeling of presence, something that is getting less and less usual in the digital world we live in. The work of art that captures your attention immediately is “Nuasea”, by Inês Manuel. Her work, an installation that captures all of your senses, occupies the center of the room while the public walks around it to tour the exhibition. The uncommon materials of ice melting in the fire on top of a cork board result in an invasive smell yet intriguing aesthetics, due to the particularities of the materials used. On the side of the cork board is a microphone that captures the sound of the dripping melting ice and plays the musical outcome in the bathroom of the gallery.

Walking around the room there are very contrasted aesthetics and ways of exposure. The sculptures appeal to touch and the diversity of materials and colors create a game of comparison on lifting, manipulating, and feeling each piece. The works “Pairless”, by Rute Garcia and “Uncertainly Constructed Traces 1 & 2”, by Telma Araújo, are what a call “memory constructions”. By this, I mean that in addition to being products that evoke the past, they also express a certain nostalgia in their appearance, almost like ruins of something from our past with which we can all identify. In Rute’s work, we can see lost souvenirs from Caldas da Rainha during 2020, among which you can find “unique” sandals that belonged to someone who left them behind. On the other hand, Telma’s work consists of using glass printing techniques to present reinterpretations of portraits of her family. Due to the deformity and sensitivity of the glass, this piece requires attention to detail, however, when we hold its dense and heavy mass we can observe the fragile brushstrokes with a feeling of care that she chooses to treat the memory. In contrast with these two, some of the works in the exhibition were distinguished by their lightness, such as the textile works: “Tales from Tall Stones”, by Megan Sharkey, a figurative map from Celtic stones inspired by a research by the artist’s father; “Dead Nature”, by Beatriz Prazeres, a still life sculpture following the concept of rotting and the natural process of decay; and “Self-Portrait as a Fairy”, by Vijay Patel, a transfeminism empowerment artwork to challenge the notion identity, which the artist affirms that is unfinished and never to be finished.

Exposed in the middle of a wall takes place “Breath (Sample I-IV)”, by Kalin Mihov, a glass and copper wire sculpture to explore the loss of fragile communication. This piece that recalls the aspect of a rib cage is meant to transmit calmness somehow taken out of context. While I was at the exhibition, I noticed a lot of different interpretations for this piece, maybe because we can all relate to this almost transparent chest as a representation of life.  Also in a chaotic and unsettling search for meaning, the visual works “Nexus”, by Juna Wesley and “Dublu Trouble”, by Andreea Rechitean and Laura Stanciu use experimental mediums to communicate. In “Nexus”, Juna explores various mediums so the audience can foresee the birth of a work of art. This project has very distinguished characteristics because despite the idea starting from the artist’s notion of self and the result being presented in a simplified way, it is exposed as a disorganized composition. In “Dublu Trouble”, Andreea and Laura decided to use the same camera film to communicate while the pandemic kept them far from each other. In their double exposure photographs from the reuse of the same 35 mm analog roll, the images translate a chance to wander between different countries and different realities. This work is unfinished because the artists want to continue to experiment and communicate, hoping to grow their collection of photographs and portray their life after lockdown.

The unpublished works “Person”, by A.Bran, and “ongoing”, by Leonie Viola, have different natures but the same intention, both of them are made to represent social situations, observations, and memories. Even though “Person” is a collection of drawings made with watercolor markers, and “ongoing” is a collection of digital photographs, visually, both of the art pieces explore the medium specificities. A.Bran’s work is a journey to explore the artistic self and experiment with drawing materials to create genderless characters and Leonie’s work is the way the artist found to question the world we live in. Both of these works are considered unfinished because the artists want to continue uncovering the meaning of their art.

Out of the exhibition room, the set of flyers “OKNA Drag Show”, by Luīze Rukšāne, invite you to a nonexistent drag show, expressing the difficulties that many artists have to accomplish an idea due to lack of time. Her work in this exhibition is meant to be a statement on how important it is to speak up, to take the ideas to the audience, even when it’s not possible. Provocatively, although the show won’t be a reality, you can take the invitation with you.

Accidentally or not, on one of the days of the exhibition, a significant part of “Nuasea”, Inês’ work, burned down, which unexpectedly turned it into ephemeral art. This unpredictability is something that can be criticized in a classic exhibition process, but not in the environment in which it is inserted in “Unfinished”. With this in mind, can we insert Inês’ work into the provocation written by Patrick (2010) while idealizing what the Fluxus movement is – “When is a “creative action” to be considered a performance, a happening, or a simple life occurrence?” We can consider Inês’ work a creative process because it is unfinished, and we can consider it a performance because of its ephemerality. Perhaps this work is the interdisciplinary answer to Patrick’s question.

Here, we could raise endless questions and paradoxes, so this conversation is also doomed to remain unfinished. This talk was closed by saying that for centuries we have been asking ourselves what art is, its messages, and its finitude. Renaissance painters saw potential and meaning in leaving their works unfinished, and critics began to recognize this debate as a creative and representative force. During these last few days, Okna brought to the public the same challenge and the same questions that our ancestors asked, and even with the knowledge that we have by standing on the shoulders of giants, art evolves by the stimuli that make us recognize possibilities and sometimes go unnoticed.

Ema Lavrador is a visual artist and researcher based in Porto. As a researcher at CITAR, she seeks to answer historical and technological questions of the various arts, while in her creative work she is interested in exploring ways of storytelling.

← Previous Project All Projects Next Project →